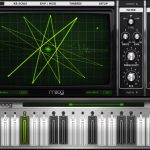 Synth apps let you create your own electronic music sounds. They can be great fun to play around with, or powerful tools to use in your music productions. Or they can be used in live performance if you have a keyboard connected to your PC/phone/tablet. Some of these professional apps (that can be quite pricey) are sometimes on special offer if you keep an eye out. When they are, get them while you can!

Alongside PC/Mac software (which you can use as plugins for your DAW), some are available for Android as well as iOS and Nintendo, However, due to limitations in the Android operating system, there is some latency (a delay between tapping a key and the sound coming out), which means iPhones/iPads are better for playing live.

Korg are well known for innovative hardware synths, and have made iOS versions of many of their classic synths that work just like the real thing at a fraction of the price of the hardware!

They have also made a lot of apps specifically designed to make use of the interface that tablets/phones provide, such as Kaossilator (for Android and iOS). This can provide new intuitive ways of creating music. They’ve even made an app for Nintendo Switch – Korg Gadget., and a couple for Nintendo 3DS – Korg M010, and Korg DSN-12.

Although many apps are quite pricey (so far as apps go) they are made for professionals, but there are some free ones, like Korg Gadget 2 LE, or Korg Module (free with in-app purchases).

Check out all of Korg’s apps here:

Moog were one of the great innovators in analogue synths, and were first used by bands such as the Beatles (Here comes the Sun), the Beach Boys. They became very popular in the ’70s with bands like Pink Floyd, Kraftwerk, Stevie Wonder and Chick Corea. And later by Michael Jackson and Radiohead, for example, and are still used to this day. Now you can get many of them in software or app form!

With the Minimoog Model D, Moog have recreated their classic synth and modelled its sound and behaviour on the real thing.

But where Moog excel is in creating new iPhone/iPad apps that not only have the classic Moog sound, but also use the touchscreen interface and accelerometers to create new ways of performing.

There’s the Model 15 app recreating a modular analogue synth. And with Animoog, you can also sequence your tracks, use Audiobus to connect with other music apps on your iPad performing together in real time, and finally export and upload your finished productions….

And there are plenty of tutorials on YouTube if you want to get to grips with using them.

French synthesizer company Arturia was one of the first to start producing software plugins of their hardware synths, and has made some very good iPad versions too.

iMini is a recreation of Dr. Bob Moog’s classic 1970 synthesizer, possibly the most famous synthesizer of all time.

iSEM is an amazing recreation of the legendary 1974 Oberheim SEM synthesizer expansion module.

iProphet. Rediscover a legendary synthesizer from the ‘80s, the Prophet VS. Deep pads, intense leads, unique effects: an iconic realm of sounds is now at your fingertips.

iSpark is an all-inclusive beat-making solution allowing to create rich tracks from A to Z. It includes a large variety of drum kits and individual instruments based on the most renowned drum machines and top-notch sound design.

There are some great demos and tutorials around, but as a taster, check out this demo of the iSpark:

Available for desktop or iPad, Sunrizer is a subtractive synthesizer with two analogue-modeled oscillators. The SuperSaw recreates the Roland JP-8000 synthesizer, used by many artists over the years. Although its an old app, its still considered one of the best. Search in YouTube to hear some of the amazing sounds it can produce….